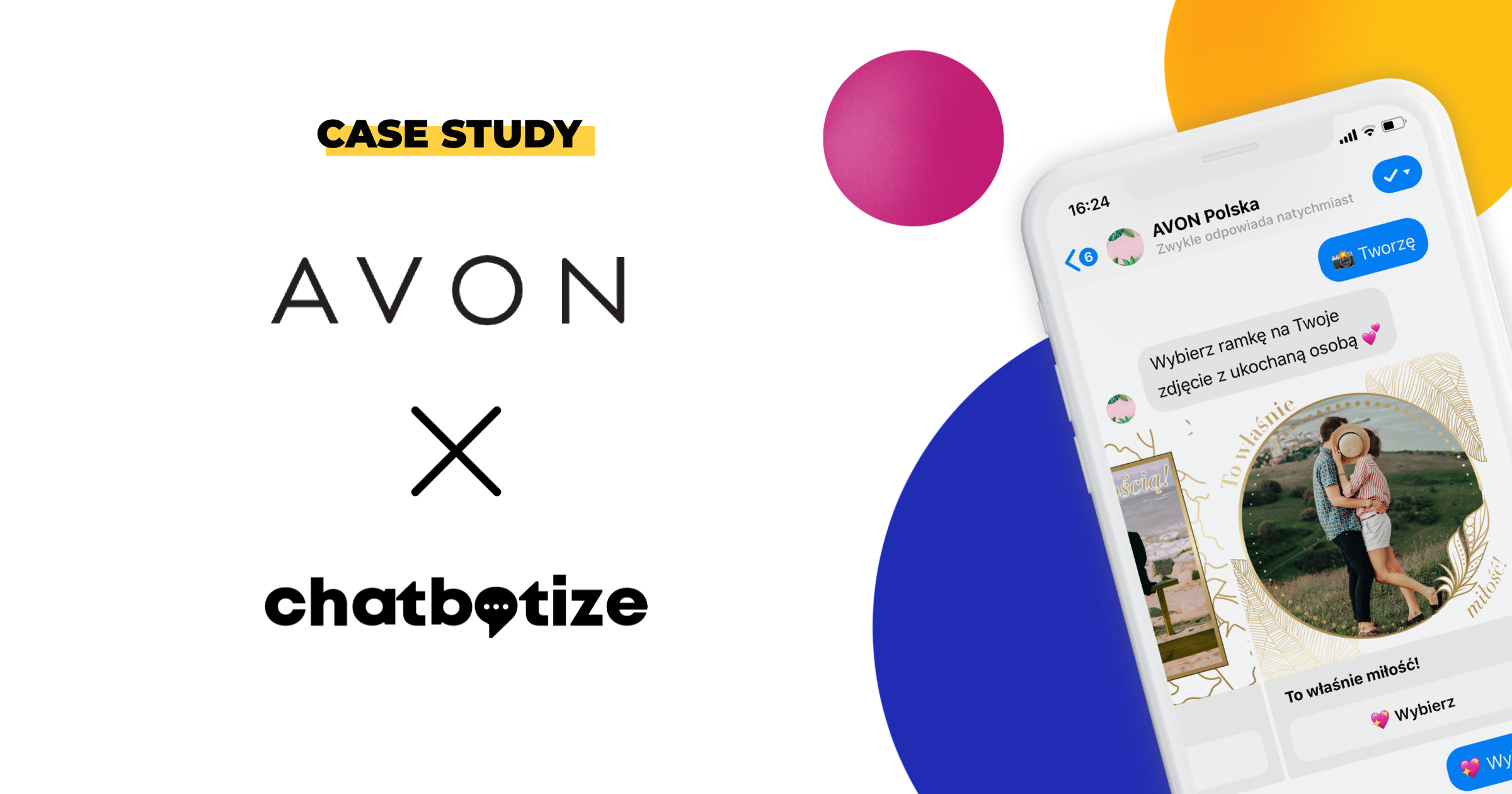 Avon is a cosmetics brand, that was founded in ... 1886! Today, it operates in over 135 countries and owes its recognition to direct sales through a network of Beauty Ambassadors. The brand’s Polish branch began its cooperation with Chatbotize in May 2019. With previous experience using chatbots in marketing, the Avon team decided on strategic conversational marketing activities. In this case study, we'll show you sample campaigns and their results.

Avon launched a quiz that allowed the users to determine their color types. The system was based on selecting a set of lipstick colors that match the client's beauty. Lipsticks were presented in the form of an AR (Augmented Reality) effect, which allowed you to "try on" a given color. In the summer, Color-roulette underwent renovations - the AR effect was supposed to refer to the vibe and colors of summer festivals. 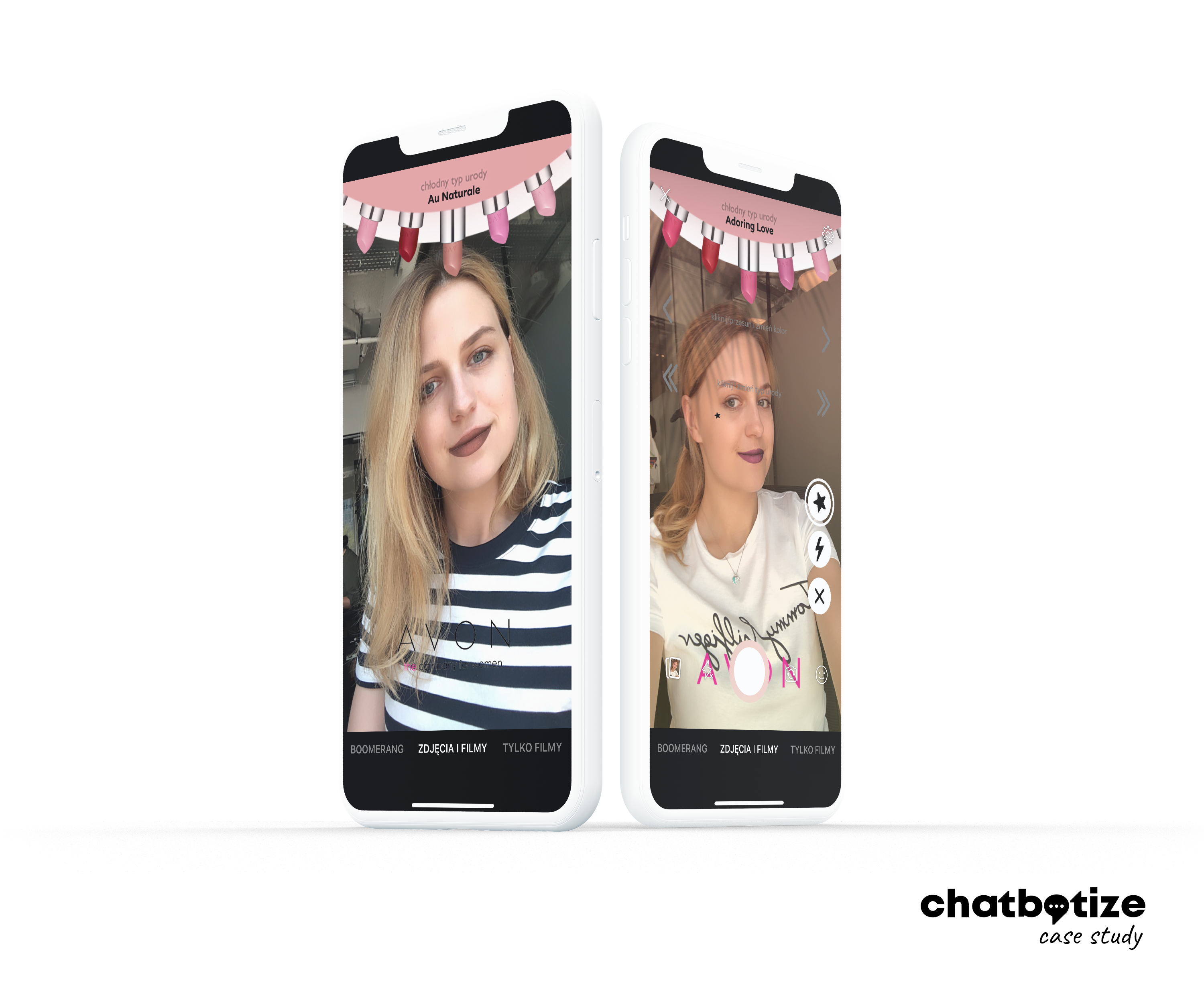 The goal of this campaign was to build awareness around a series of intimate hygiene products. Avon conducted a competition in which these cosmetics sets could be won. The competition was based on the answer to such task: "Write us your most reliable way to take care of yourself in the summer." By using Messenger, Avon broke the barrier associated with users' involvement in campaigns related to such personal products as intimate hygiene fluid. 647 people took part in the contest, of which 11% went to the product page immediately after answering the competition question.

How were they able to collect several hundred applications with zero financial input? Avon used the Facebook Comments module for this purpose. The company wrote about the competition on Facebook and provided graphics that encouraged participation. To take part in the competition, one needed to comment on that post, and the chatbot sent a message to the user with the competition question. As a result, almost 1,200 people went organically to Messenger for conversating with the brand, and the conversion rate in the competition was 55%! 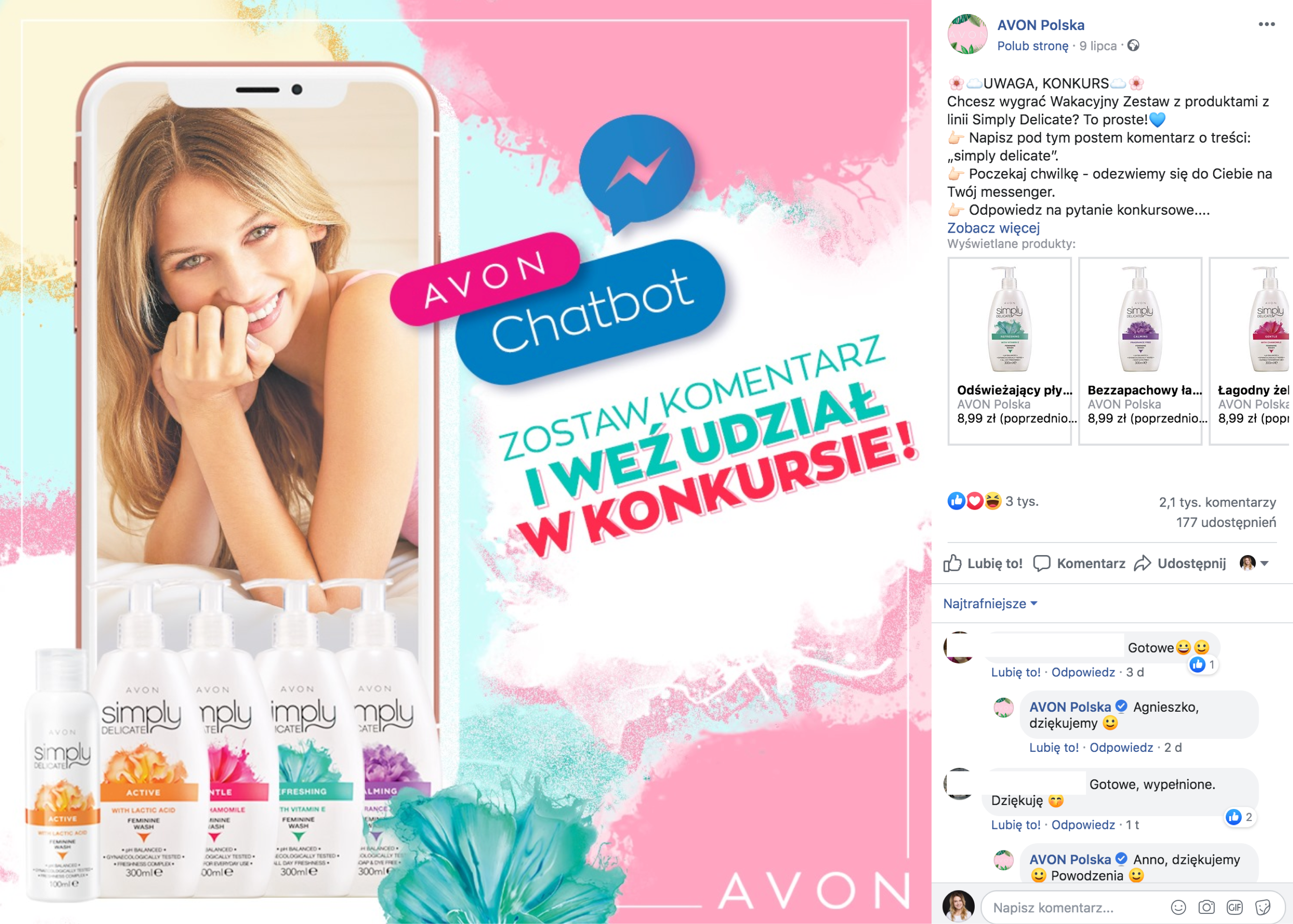 To participate in this competition, users had to go through a story that would tell them about new sensual fragrances for her and him. Then they had to answer the competition question: "Tell us, what is your unfailing way to attract (his) attention 💋" Goal: commitment, brand awareness (+ support for promoting a new product).

51% of the people who got acquainted with the story about sensual scents sent a competition application. 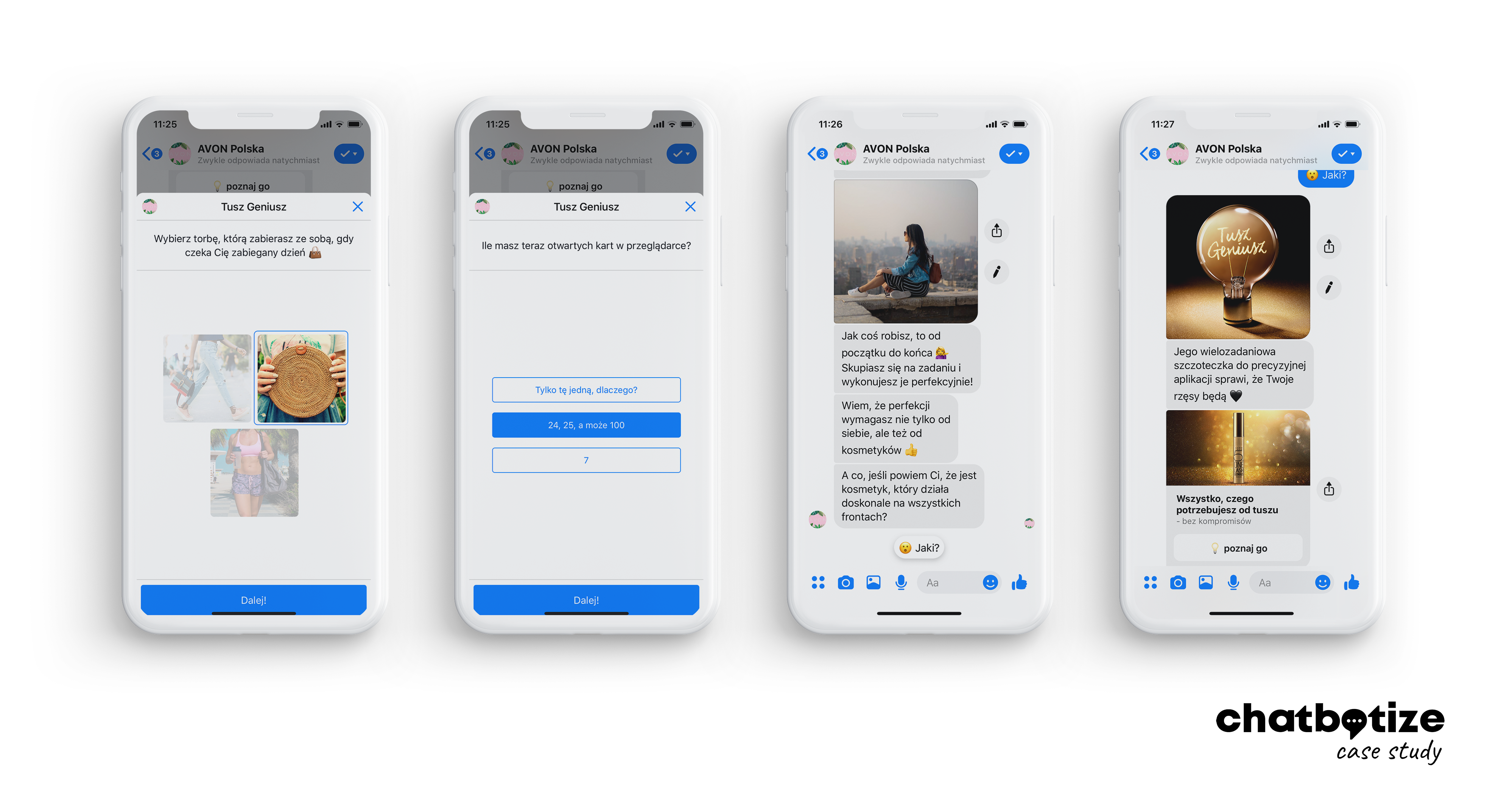 Mascara Genius is a new, multi-purpose mascara. The goal of this activation was to build awareness around the product and its strengths; showing that this mascara is perfect for every woman. Avon used a psychological quiz - Are you a multi-tasking champion? - for this purpose. After completing the quiz, the user received information about the Genius Ink from the Buy Now CTA. As many as 31%_ of people went to the purchase page!

The TTA perfume line is the best-selling Avon fragrance. The brand has just released a new fragrance from the series: TTA Celebrate, referring to the celebration of love. It was promoted with a puzzle - an emoji riddle, based on which the users were to guess the campaign's slogan. After guessing the password, the possibility of applying a frame to the photos of their choice was unlocked. Frames refer to the celebration of love, and the bot encourages to use the frame and share the photo with a loved one. As much as 9% of people who generated their frame went to the chatbot thanks to sharing! 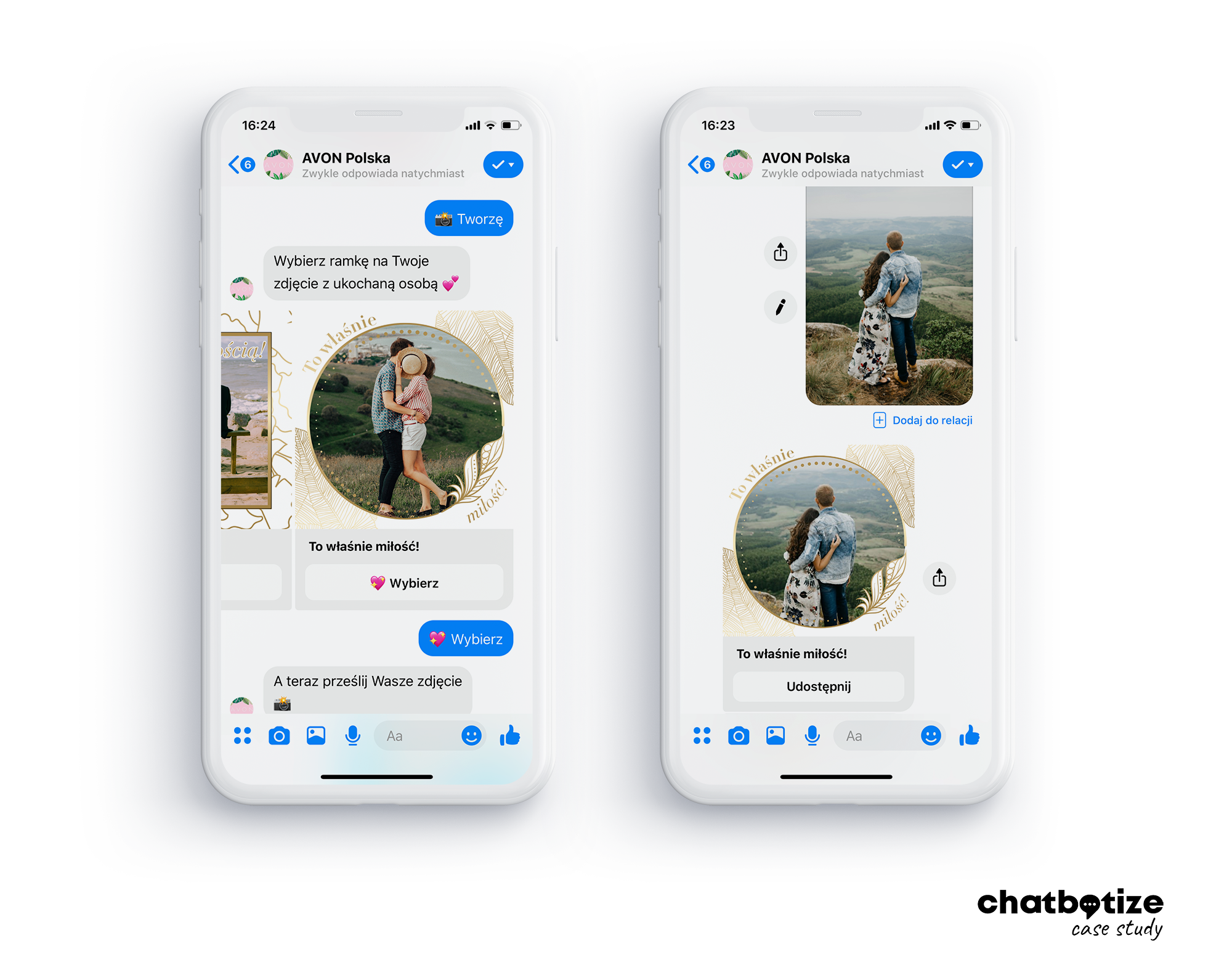 Avon is a very popular cosmetic brand with a wide range of products and millions of customers around the world. That's why an essential part of Avon's chatbot is the automation of answering to frequently asked questions. The AI Consultant module is used for this purpose. For Avon, it is equally crucial to efficiently redirect the user to the customer service department when the chatbot doesn't understand the question or the customer chooses the human contact option. For this purpose, the Handover module was used, thanks to which the consultants would only see the inbox messages that they have to deal with. The chatbot postpones its activities for the time of the consultant responding. After the conversation, the consultant thanks the user for their time and forwards them back to the chatbot with just one click.

How does Avon attract users?

The key element of conversational marketing is finding an effective (and cheap!) way of getting users to your chatbot. Discover the channels that Avon uses and be inspired by great advertising creations!

They are the primary source of user acquisition for Avon. For the advertisement to bring fantastic results, the creation must be eye-catching and bring out curiosity for the user to engage in what will happen later, i.e., chatbot activity. Make sure that the activity is attractive (it is effortless to achieve that with Chatbotize!;)), and then create a creative path that will present it. See how Avon does it! 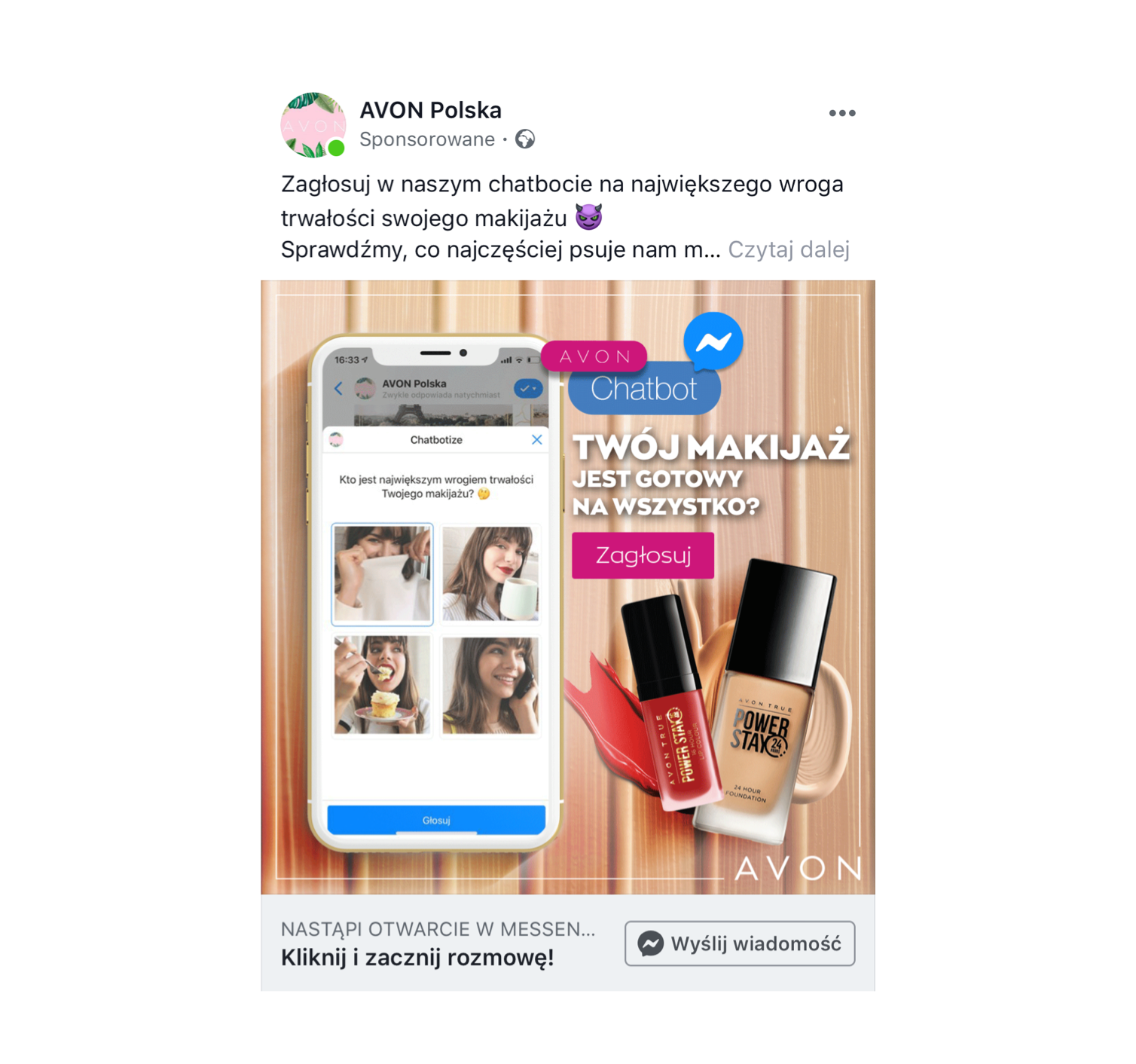 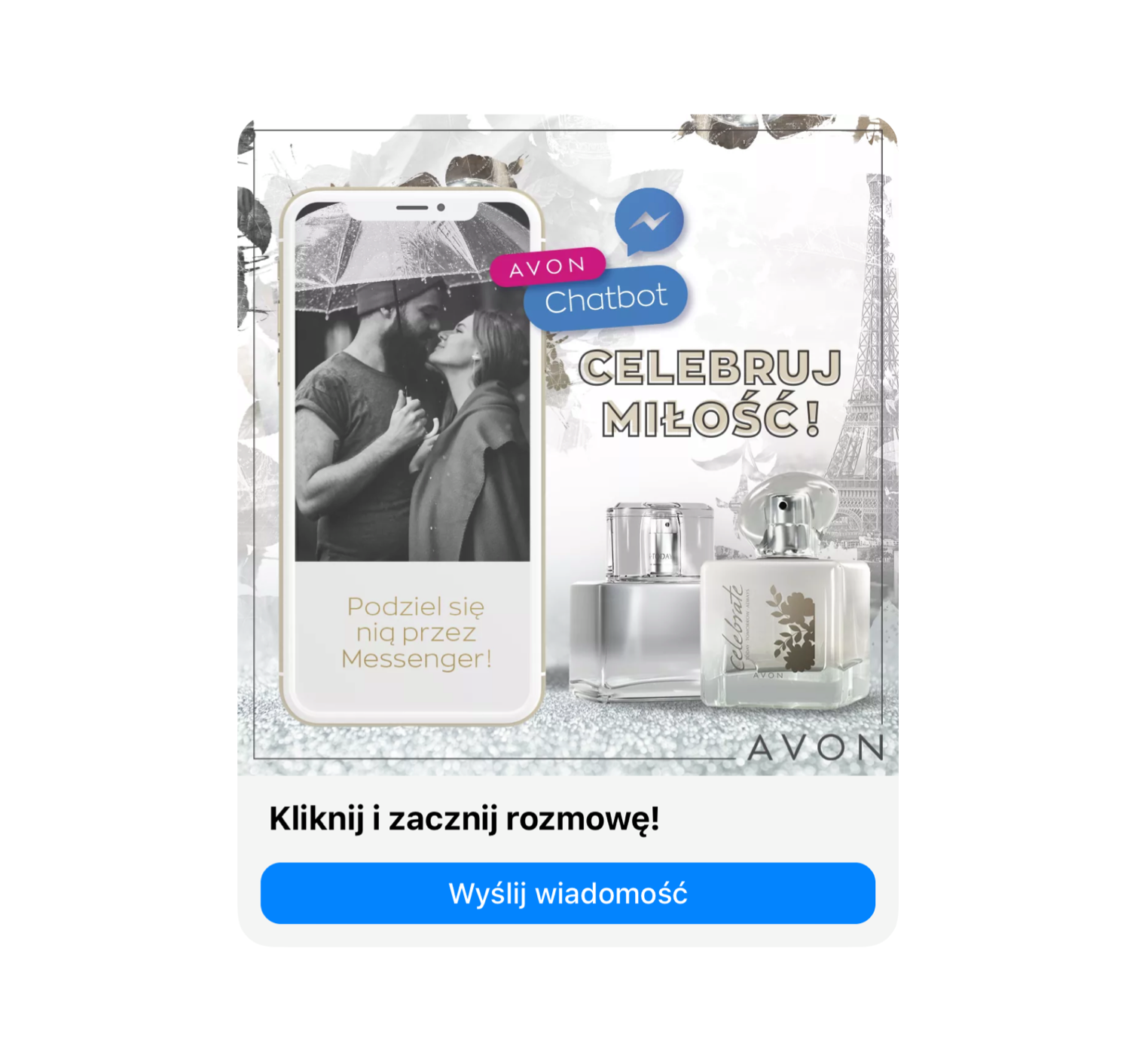 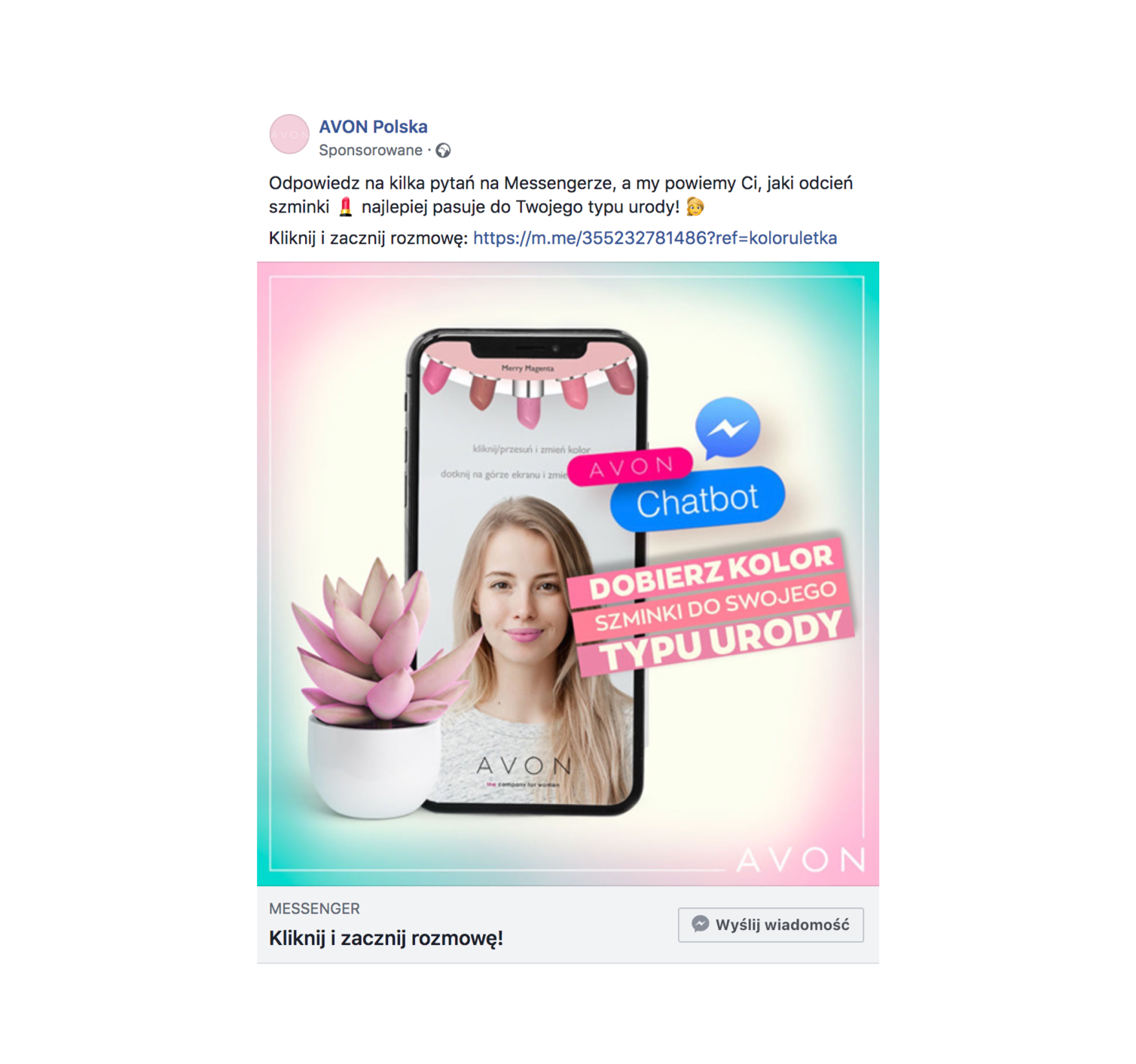 ... that is, people who write on Messenger because they want to get information, e.g. on a product.

The mechanism used in the Simply Delicate campaign (described earlier) is an excellent source of organic movement. Users comment on the post, and then the chatbot can write to them first. The post also automatically gains visibility thanks to subsequent user comments. It's a real traffic generation machine!

Shares are the most desirable source of acquiring users. On the one hand, they show the active involvement of the user who shared the given chatbot activity with his friend, on the other - you acquire users for free. Users who are also strongly involved, because friends, by sharing, provided them with proof of equity - "I use it, you should too."

Avon is an excellent example of effective conversational marketing. The brand uses a chat channel in each campaign to engage its regular customers as well as acquire new subscribers who will gradually, through involvement in subsequent activations, become Avon customers and ambassadors. Keep it up!

If you want to learn how to use conversational marketing in your organization - sign up for a free demo with our expert!

AVON Case StudyGDPR compliant chatbotHow to Cut Customer Service Costs by 50%?7 Problems That Conversational Marketing Can Resolvem.me links - what are they and how to use them?

All rights are reserved by Chatbotize